Today I want to present you my version of the corset pattern „Corset droit en 7 pièces“, which is a historic pattern from a french corset pattern making book from 1911. The book is called Cours complet d’enseignement professionnel de la coupe du corset and you can read it on gallica for free. Since my french is practically non existent, I used the article „1911 Corset Pattern Draft, Part 1“ on Foundations Revealed to construct the pattern. The pattern has the typical edwardian s-curve silhouette, that was popular around 1900. This silhouette is very comfortable for me, since it fits to the natural curve of my back.

I drafted the pattern in Valentina, an open source pattern making software. I like Valentina very much, when drafting basic patterns, which are based purely on measurements and math. For pattern manipulation this software is not (yet) suitable, so I converted the pattern to Corel Draw to finish it. This sounds far more complicated, than it actually is. I plan to do a tutorial on how to use both programs for pattern making very soon.

With the help of a mock up I determined that I needed more fullness around the bust and hips. Below you can see a picture of the original pattern in my size and the new pattern after the changes I made.

For the final corset I used grey spot broche coutil and black cotton lining. I constructed it as a single layer corset with internal boning channels and a floating lining. This was the first time I constructed a corset with the seam allowance folded open instead of using welt seams. I’ve seen this method on corsets by corset makers I love very much and decided to give it a try. The smooth surface you get by using this method is absolutely wonderful, but I’m still a bit skeptical how well the seams will hold up to long time wear. Have you used this construction method before? What do you think of it?

Now follow pictures of the construction process with explanations of what I did.

After finishing the basic corset, it took me very long to decide on embellishment. I thought to apply ribbon embroidery, ruffles or simple flossing. Yet in the end I decided to use classical lace embellishment. I cut around the motives and handstitched them onto the corset. Then I finished the corset with black satin binding. And in the very end, I added some rhinestones to give the corset some lovely glitter. 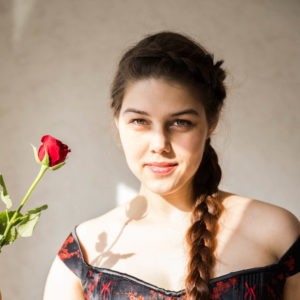